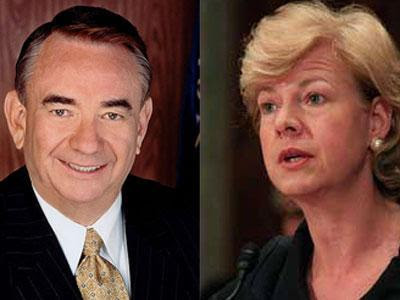 The Advocate reports that GOProud has endorsed the GOP opponent of Rep. Tammy Baldwin for the U.S. Senate.

“Tommy Thompson is a common-sense conservative who will focus on creating jobs and growing the economy for all Wisconsin,” said GOProud executive director Jimmy LaSalvia in a statement. “Governor Thompson’s experience and leadership uniquely qualify him to serve in the U.S. Senate.” Thompson, a four-term former governor and Secretary of Health and Human Services under President George W. Bush, won a hotly contested, four-way primary last week. His win marked a break in this year’s trend of tea party upsets over establishment Republican figures, and arguably delivered the toughest general election challenger to Baldwin. GOProud backed a tea party favorite, former WWE chief executive Linda McMahon, in her victory in the Connecticut Senate primary last week.

“Tammy Baldwin will be a Senator of the special interests, the D.C. insiders, and the most liberal activists. Tommy Thompson will be a Senator for the people of Wisconsin. The voters of Wisconsin need to ask themselves whether or not they want to send a woman to the Senate who has a voting record to the left of Nancy Pelosi. Tammy Baldwin has been a rubber stamp for the disastrous big government policies of the far left.”

UPDATE: Towleroad points out this Think Progress clip in which Thompson declares that it should be legal to fire somebody for being gay.

Previous Billboard Of The Day
Next Two Minutes Of Minnesota Hate, Vol. 33