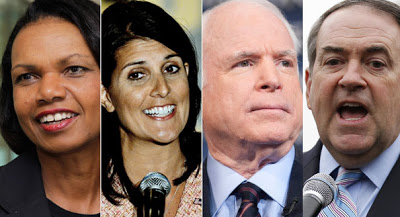 Still no Sarah Palin, but the Republican National Committee announced a roster of mostly conservative headliners for the GOP convention this month in Tampa, Fla. The Republican 2008 presidential nominee, Sen. John McCain of Arizona, will be among the top speakers at the four-day gathering of party faithful. One of the party’s rising stars, South Carolina Gov. Nikki Haley, will have a leading spot, as will top conservatives – Mike Huckabee, the former Arkansas governor and now television host, Florida Gov. Rick Scott and Ohio Gov. John Kasich. In a nod to the critical Latino vote, the convention tapped New Mexico Gov. Susana Martinez for a prime role. And while former President George W. Bush is not expected to attend, his former secretary of State, Condoleezza Rice, will also have a prime address.