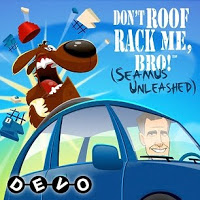 Devo has teamed up with Dogs Against Romney for a new song ripping the GOP candidate for his infamous Seamus incident. Band member Jerry Casale:

“It’s disconcerting,” he said. “I could even say that I’m pissed off. I am an animal lover. This story is not about being from a red or blue state, being a Democrat or Republican. There are seven billion people on a planet that’s going to hell in handbasket. The United States is the most formidable force on the planet. And do you want a man whose character is like that to take charge? It just tells me something about him. He’ll do more harm than has already been done.”