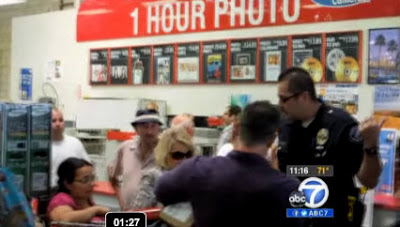 After signing autographs for fans, today Joan Rivers handcuffed herself to a Costco shopping cart in protest that the discount giant has banned her new book due to naughty language on its jacket. Police were called to remove Rivers from the premises.

“Costco, who sells condoms by the pallet, who sells Paula Deen books and – which is not good for their customers’ health – they decided to ban my book,” the 79-year-old Rivers said. “This is a First Amendment violation. You’re banning a book because it says a funny quote by Marie Antoinette? Where is this going to lead us to? “This is a store that sells 300 rolls of toilet paper at the same time, and I say any customer that buys 300 rolls of toilet paper deserves a funny book to sit on the toilet and read.”

Rivers later told local news that she’s especially outraged that Costo would ban her, since she is single-handedly keeping their sex toys department in business. Rivers’ book, I Hate Everyone (Including Me), has topped the New York Times bestsellers list for several weeks.

NOTE: Like many, Rivers doesn’t appear to understand the First Amendment. Still, it was quite the effective stunt.