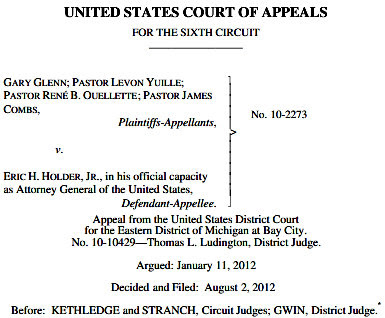 The Sixth Circuit Court of Appeals has ruled against three Michigan pastors who claimed that the federal Hate Crimes Act restricted their freedom to be bigoted douchebags. Ryan J. Reilly reports at Talking Points Memo:

Opponents of the law argued the legislation outlawed “thought crimes” and was meant to “eradicate religious beliefs opposing the homosexual agenda.” The suit was first filed in February 2010 by the conservative Thomas More Law Center, a few months after President Barack Obama signed the law in October 2009. It cited Bible passages and George Orwell’s Animal Farm, claiming the law treated certain individuals “more equal than others.”

But the appeals court found that the plaintiffs had “not alleged any actual intent” to cause bodily injury to any gay individuals, pointing out that the pastors explicitly denounced “crimes of violence perpetrated against innocent individuals.” The Hate Crimes Act, the appeals court ruled, “does not prohibit Plaintiffs’ proposed course of speech” and said they “can’t quite pinpoint what it is they want to say that could subject them to prosecution under the Hate Crimes Act.”

Even if they quoted Leviticus 20:13, which called for men who have sex with one another to be put to death, “they have not alleged any intention to do more than merely quote it,” which wouldn’t be unlawful under the Hate Crimes Act, the appeals court ruled.