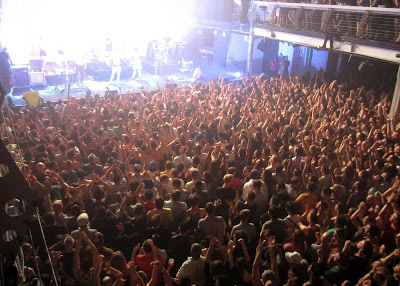 Scissor Sisters Have A REAL Kiki

Last night the Scissor Sisters played Terminal 5 in Hell’s Kitchen where an already ecstatic (and virtually all-male) audience went nuts when during their current club smash, Let’s Have A Kiki, the band brought out Justin Bond of the legendary cabaret act Kiki & Herb. We literally screamed in delight and later at the XL after party I got to chat with Justin who was thrilled with the reception she got. We didn’t stay long at the after party, but my loyal companion Aaron and I left marveling at the Limelight Disco 2000-esque crowd of club kids, dragoons, and general wildness. We both had thought that scene was long gone and we simultaneously felt very old and very pleased.

RELATED: Terminal 5 is my favorite Manhattan concert venue in part because they usually manage to keep the place fairly cool no matter how jammed the room may be. But not last night, where it was murderously hot in the balconies. To put it in terms San Franciscans may relate to, it was 4am at Real Bad hot. It was holiday weekend Pleasuredome rear disco hot. That’s how hot it was.