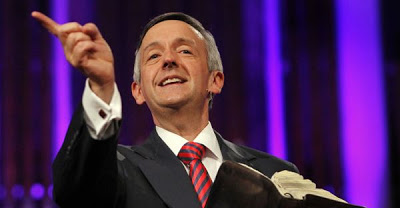 Quote Of The Day – Robert Jeffress

“Amazingly, some gay activists don’t even try to hide the link between homosexuality and pedophilia. There are some who are right now are actively involved in trying to legalize sex between adults and children by lowering the age of consent or removing it altogether. In all fairness, it would be wrong to suggest that all homosexuals to pedophiles, it would be wrong to even suggest that a majority of homosexuals are pedophiles, but the truth nevertheless is there. There are a disproportionate amount of assaults against children by homosexuals than by heterosexuals, you can’t deny that, and the reason is very clear: homosexuality is perverse, it represents a degradation of a person’s mind and if a person will sink that low and there are no restraints from God’s law, then there is no telling to whatever sins he will commit as well.” – Pastor Robert Jeffress, speaking on his national radio show.