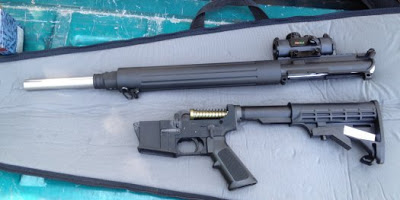 Print Your Own Assault Rifle

An inevitable development for 3D printers.

Get ready. It’s now possible to print weapons at home. An amateur gunsmith, operating under the handle of “HaveBlue” (incidentally, “Have Blue” is the codename that was used for the prototype stealth fighter that became the Lockheed F-117), announced recently in online forums that he had successfully printed a serviceable .22 caliber pistol. Despite predictions of disaster, the pistol worked. It successfully fired 200 rounds in testing. HaveBlue then decided to push the limits of what was possible and use his printer to make an AR-15 rifle. To do this, he downloaded plans for an AR-15 in the Solidworks file format from a site called CNCGunsmith.com. After some small modifications to the design, he fed about $30 of ABS plastic feedstock into his late-model Stratasys printer. The result was a functional AR-15 rifle.

Commenters in the above-linked PopSci article are arguing whether the rifle’s creator could have possibly created all of the necessary working parts. Still, so much for gun control? (The story was tweeted out today by openly gay Rep. Jared Polis.)