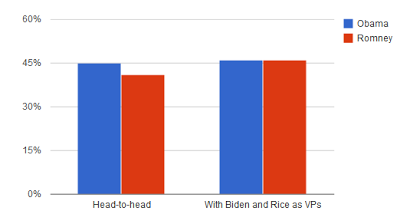 The former secretary of state is the clear choice of Republican voters to be Romney’s vice president, according to a new Fox News poll that shows her garnering the support of 30 percent of them. Sen. Marco Rubio (R-Fla.) is second with 19 percent. The more interesting number, though, is what Rice could do for Romney on the ballot. While President Obama leads Romney overall 45 percent to 41 percent, adding Rice to Romney’s ticket shifts many of the remaining undecided voters to the Republican side, creating a 46 percent to 46 percent tie. That shift, as it happens, is statistically significant. In other words, the poll shows that Rice would move votes into Romney’s column.