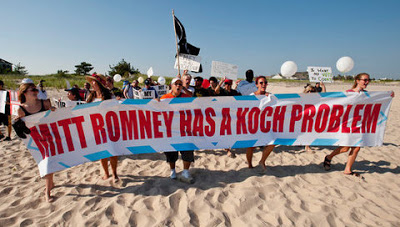 Mitt Romney faced some protesters at his fundraiser in the Hamptons.

What was billed as a day of elegant campaign events at the homes of the ultrarich turned out to be an afternoon of curious and clashing tableaus: protesters with their bandannas and Occupy Wall Street-inspired chants (“We got sold out, banks got bailed out!”) standing amid multimillion-dollar mansions, where live bands played “Margaritaville” and donors dined on prosciutto-wrapped melon balls. A luncheon fund-raiser was held at the sprawling home of Ronald O. Perelman, the billionaire financier and Revlon chairman. Widely described as the largest estate in East Hampton, when last advertised in the early 1990s, the house was said to have 40 rooms, 9 fireplaces and a mile of frontage on Georgica Pond. After that, Mr. Romney attended events at the Southampton homes of Clifford Sobel, the former United States ambassador to Brazil, and David Koch, the billionaire industrialist and longtime benefactor of conservative political causes.

Previous Fifty Shades Of Grey: The Musical
Next Woman Beats Pastor With Bible