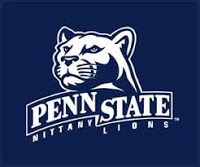 At a press conference this morning, the NCAA announced the penalties for Penn State’s role in the Jerry Sandusky pedophilia scandal. And they are whoppers.

Penn State was socked with a four-year postseason ban, the loss of 40 scholarships over four years and a $60 million fine stemming from its coverup in the sake of the Jerry Sandusky child sex-abuse scandal. In addition, all victories from 1998-2011 have been vacated, a huge blow to the coaching legacy of Joe Paterno, the winningest football coach in college football history. NCAA President Mark Emmert announced the penalties, saying that “one of the dangers in our love of sports is that sports themselves can become too big to fail, too big to challenge.”

The $60M fine will be used to create a fund for the victims of sexual abuse.

Previous Conan The Bacterium
Next TODAY: SiriusXM At 2:30PM