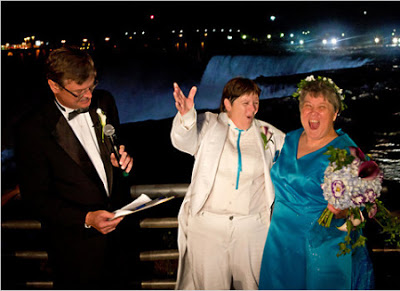 New York inked its gay marriage law with a nail-biting state Senate vote on the night of June 24, 2011, after weeks of intensive lobbying by Democratic Gov. Andrew Cuomo. Exactly one month later, New York became the sixth and largest state to allow gay weddings — more than doubling the number of same-sex couples eligible to wed. The new law was ushered in with a whirlwind of weddings that started in the minutes after midnight from Niagara Falls to New York City.

“When it became a reality in New York, that’s when I think most Americans started to realize that this is something we’ll all be dealing with and started thinking about it seriously,” said Marty Rouse, national field director for the Human Rights Campaign. “The momentum from New York can’t be underestimated. After Massachusetts becoming the first state, nothing has had that influence.” Rouse said that because of New York’s size and influence, people around the country had to think seriously about what legalization meant for them and their families.