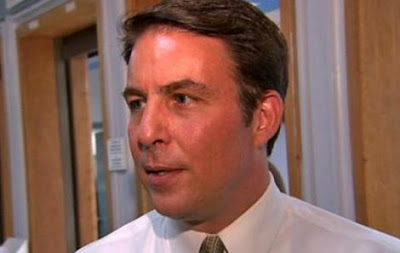 Former Massachusetts state Sen. Richard Tisei wants to be the first (*non-incumbent) openly gay Republican elected to Congress. Tisei, whose campaign issues page makes no mention of LGBT causes [Updated correction below], has been endorsed by the Victory Fund.

But this is Massachusetts, where Democrats outnumber Republicans 3 to 1. Few places in the state are as Democratic as Lynn, the most populated city in the 6th district. Democrats outnumber Republicans in Lynn by nearly 10 to 1. But Tisei is finding support even there. On a recent morning, he was at the Capitol Diner, and many of Lynn’s small band of Republicans had gotten word that he was there. Insurance company owner John Olson was frustrated by the fact that so many people in Lynn rely on government support.

“All the social services are dumped in Lynn, and the inherent costs go with them, too, and I think that’s an area where we need some change,” Olson said. “When families took care of their own, we didn’t have the issues that we have these days.” Rob Snook was just glad to find in Tisei a fellow Republican. “You’re Republican, so you’re on the right side, I think, so far,” Snook told Tisei. “There’s a few of us around. Not many, but a few of us around.”

Tisei faces eight-term incumbent Democrat Rep. John Tierney, who narrowly trailed Tisei in a May poll that Tierney claimed was skewed towards Republican voters. Tisei came out in late 2009 shortly before his failed bid for Massachusetts lieutenant governor.

RELATED: There have been two other gay Republicans in Congress. In 1994 eight-term Rep. Steve Gunderson (WI) was outed on the House floor by then Rep. Bob Dornan. Gunderson went on to be the only Republican member of Congress to vote against DOMA and did not seek reelection after that. In 1996 Rep. Jim Kolbe (AZ) was outed by activists after his vote in support of DOMA.

UPDATE: A reader points out the Tisei does indeed express support for marriage equality on his campaign site, although the message is not on his “issues” page, which is where most politicians tend to address such items.