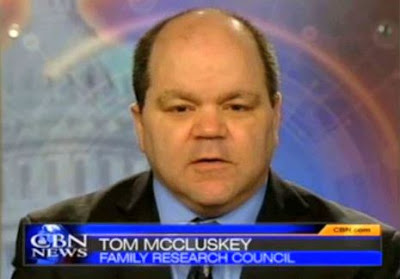 The Family Research Council is the first hate group out of the gate to slam House Majority Leader Eric Cantor’s call for GOP tolerance on LGBT rights issues.

This misguided tolerance leads both political parties to embrace H.R. 6019, legislation introduced by Rep. Sheila Jackson Lee (R-Texas) (ironically one of the biggest bullies in Congress) that seeks to continue a slush fund at the Justice Department by federalizing “bullying.” This bill would very likely fund the Dan Savages of the world to go after the Dan Cathy’s of the world. That isn’t tolerance – that is taxpayer-funded culturcide. It is Rep. Cantor remarks on his own party though that seems to indicate it is the wrong kind of tolerance he is supporting. A party needs to stand for something or it stands for nothing. Is Rep. Cantor saying that if a Member of Congress was an avowed socialist they would embrace them? One would hope not. Party platforms need to mean something and should be guidelines for anyone wishing to join or work for that party. If your ideas and stances are good ones and you are consistent in your beliefs people will embrace you – otherwise your majority will go away even quicker then the last one did.

That didn’t take long, did it?