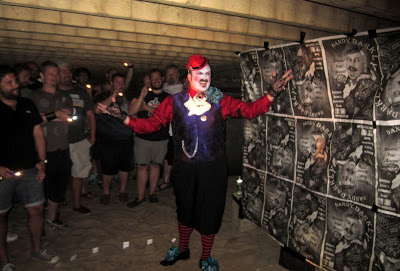 One of the more interesting things I’ve done here in Provincetown was attending a show by performance artist Dandy Darkly under the infamous Dick Dock, where audience members were handed mini-flashlights to train on Dandy as he spun several tales that riffed on masculinity, pirates, and other themes half-sung in hilarious rhymes. His final piece, Bear Skinner, was a Silence Of The Lambs-esque story of woefully hairless bear serial killer who harvested his victims to make a fur suit. You can catch Dandy Darkly later this summer at the New York Musical Theater Festival.

Previous Afternoon View – Wonder Wobear
Next Crazy Eyes: Only A Tiny Percentage Of The Uninsured Go To The Emergency Room