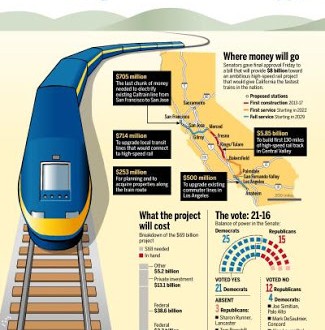 In a narrow vote, the California Senate has allocated $8B for the beginning of a high-speed rail system.

The vote was dramatic because it barely passed with just 21 votes, exactly the number needed, after some arm-twisting by Governor Brown and under pressure of losing $3.3 billion in federal funding. A number of Democratic senators, including three who served on the Senate’s unofficial high-speed rail oversight committee, voted against the plan, saying it’s too soon in the current economy and too risky an undertaking, with the possibility that the central “backbone” of the line could get built and the rest of it never finished if the funding never materialize.

Backers say the first line of the proposed system will link Los Angeles and San Francisco. However farming corporations in the Central Valley have filed multiple lawsuits to prevent the rail from running through their land.