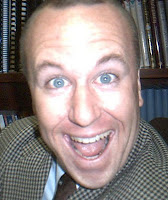 Alan Chambers: Perverted Homosexual Leaders Are Like Hitler And Marx

IMPORTANT UPDATE: It appears the below quote was first published by the Christianist Charisma Magazine in 2004. Ex-Gay Watch speculates as to why the story is now appearing on the magazine’s front page with today’s date: “Is someone at the conservative Christian publication trying to sabotage him [Chambers] by bringing up his past words?” As always, infighting is funny. And also, in this case, fascinating.

“Pro-homosexual leaders realized the same truth employed by Hitler and Marx: To advance their agenda they must radically influence the hearts and minds of young people. Because Mom and Dad are working all day and Susie and Junior are in school and then home alone, activists came up with a plan: Use public schools, television, the Internet and other youth-friendly venues to influence the way young people view homosexuality. Under the guise of AIDS education, groups such as the Gay Lesbian Straight Education Network gained access into public schools.

“Similarly, pro-homosexual activists ran for school board positions and partnered with every kid’s favorite after-school babysitter, MTV. Teenagers got hooked on the Internet, which opened them up to a 24-hour source of temptation and perversion. Now, perhaps too late, we are waking up from a three-decade sleep to realize that the gay lobby has taken America hostage. I hope we are not so naive that we think their agenda stops with legalizing same-sex marriages. Ultimately, if this process is not stopped, the gaying of the United States will begin to affect religious freedom.” – Alan Chambers, head of Exodus International, desperately trying to win back the hate groups who have slagged him since his confession that nobody is ever “cured” of being gay. (Via Right Wing Watch)

Previous ITALY: Soccer Star Fined €15,000 For Hoping There Are “No Gays” On Team
Next Photo Released Of Colorado Suspect