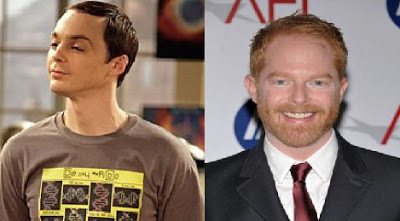 Openly gay actors Jim Parsons and Jesse Tyler Ferguson are among those nominated for 2012 Emmys. The Los Angeles times recaps the biggest nods:

Many of the nominees have been perennial favorites in recent years, such as “Mad Men,” “30 Rock” and “Modern Family,” as well as Jon Hamm, Tina Fey, Michael C. Hall and Jim Parsons. But there were also some newcomers in the mix, including Showtime’s freshman drama series “Homeland” and its stars, Damian Lewis and Claire Danes. AMC’s period drama “Mad Men” was one of the big winners of the morning, earning 17 nominations including nods for best drama, best actor for Jon Hamm and best actress for Elisabeth Moss. “Downton Abbey” had 16 nominations and is another contender for best drama. The impressive showing for the historical British drama indicates that it got a boost from the strategic decision to move it from the miniseries category — which it won last year — to the dramatic series category.

Ferguson faces all the male actors in Modern Family. True Blood was completely snubbed. Dammit, I was rooting for Pam.

Previous TRAILER: Vito
Next Ann Romney: We’ve Given “You People” All You Need To Know About Our Finances