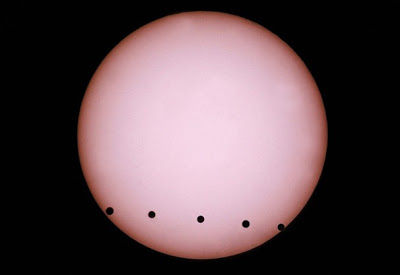 You’ll only get one shot at seeing this in your lifetime.

The annals of European astronomy burst with famous names: Copernicus, Kepler, Halley. Jeremiah Horrocks? Not so famous. But in 1639, the young Englishman became the first person known to witness one of the rarest events in the heavens: the passing of Venus across the face of the sun — a transit. On Tuesday, Venus will again cross the sun, for just the sixth time since. It won’t do so again until 2117, making this the last transit of Venus for nearly everyone alive today. Telescopes around the world — and up in space — will turn sunward as the roughly seven-hour transit begins at 6:03 p.m. Eastern time. As the black dollop of Venus inches along, scientists will examine the planet’s atmosphere and gather clues that may help them find Earth-like planets circling other stars.

Previous Infighting is Funny, Part 90
Next Headline Of The Day