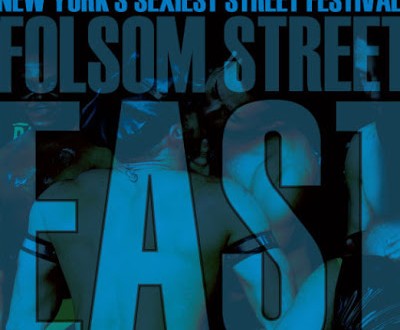 New York City’s Folsom Street East Fair is this Sunday and Jeremiah Moss reports that the owners of luxury condos nearby have petitioned the local community board to end the fair. Moss’ site Vanishing New York has a quote from a resident:

Residents from several surrounding buildings have passed fliers asking our residents to write to the Community Board to relocate or totally eliminate Folsom Street East because “fetish” fairs shouldn’t be allowed so close to so many residential buildings. There’s word that a petition of some sort will be circulated but I’m not exactly sure what the details are. A letter was written to the Community Board asking how they can assure residents access to the building without having to walk through the fair itself. Another suggestion was to move it to the next block where it’s bordered (for now) by commercial on two sides, Con Ed to the north, and West Street. The primary issue for us at 540 W 28th isn’t the Eagle or even Folsom Street East. It’s allowing residents access to the building without having to go through the fair itself. Other residents of the surrounding buildings and even my own building may have additional concerns with regard to the lewd conduct and nudity in full view from their units.

Moss and many others (including myself) have long pondered the future of the newly fancy West 28th Street. He writes:

Last year, when the second part of the High Line opened, I wondered how long the sex-positive Folsom Street East festival would survive on West 28th, now that the once-desolate block has become a destination for tourists and condo-buyers. Soon after, I looked at the arrival of massive condo-box Avalon West Chelsea, coming to the same block, right across the street from the Eagle gay leather bar, and predicted that the Eagle would not last much longer, either.

Folsom Street East tells Moss that they’ve not directly received any complaints, but have made some changes to the fair’s layout this year to accommodate the new residents of the street.

We were surprised because we haven’t been contacted by anyone. Folsom Street East is a community event, and is eager to work with the neighbors. We observed certain issues last year, so one of the ways we have adjusted the fair this year is to provide a 5-foot-wide sidewalk along the buildings that goes from 11th Avenue down to the condos at 540 W. 28th Street. That way residents don’t have to walk through the attendees in the street. They will be able to walk alongside the buildings and enter their own home as usual.

It’s the oldest story in Manhattan. A formerly shitty area full of gay clubs, titty bars, and danger suddenly becomes posh. And out goes the nightlife.

Previous Obama Boy – I Have A Crush On Obama
Next Billionaire Sheldon Adelson: I Will Spend $100 Million To Elect Mitt Romney