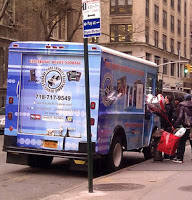 Students are banned from carrying cell phones at New York City’s public schools, but rather than leave the devices at home, many students pay $1/day to leave them with mobile storage companies whose trucks are parked outside the school grounds. Nice racket, eh? But yesterday one of the trucks was robbed at gunpoint of hundreds of phones. Panic and wailing ensued.

The kids, who use the ironically named Safe Mobile Storage because electronic devices are banned from school, scrambled out from Christopher Columbus HS in a panic when word of the heist spread at about 11 a.m. “They took my iPhone and my iPod Touch,” said Brandon Solas, 18, as he stood helplessly outside the truck parked down the block from his Bronxdale school. Solas said the robbery netted “mostly iPhones, iPod Touches and Blackberrys . . . They got a lot of dough on that one.” Another student, Miriam Hernandez, wept hysterically in her boyfriend’s arms. “That iPhone had everything — pictures of my boyfriend, my niece, my family’s videos — everything,” wailed Hernandez, 15. “I just got that iPhone and just put all that on there. “And it looks like I’m not getting another one!”

The city has repeatedly cited the trucks for unlicensed street vending. One truck owner has filed suit against the city for harassment.