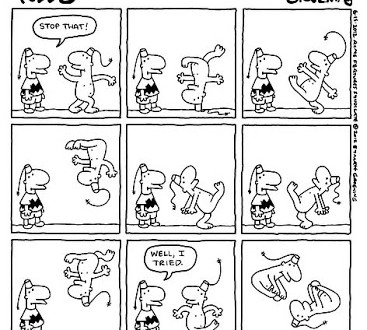 The Final Life In Hell

The continuing demise of print has claimed another victim, Matt Groening’s seemingly eternal Life In Hell strip, in which cavorted Jeff and Akbar, the gay “lovers or brothers or both, whatever offends you the most.”

“Life in Hell” actually earned Groening his big break in Hollywood. It started running in Wet Magazine in 1978, then moved to the now-defunct LA Reader, where Groening worked. The strip eventually made its way to LA Weekly. Its popularity grew, amassing a client list of more than 250 papers, when producer Polly Platt noticed “Life in Hell” and showed it to actor/producer James L. Brooks. Brooks contacted Groening and wanted him to develop a series of “bumpers” based on “Life in Hell” for “The Tracey Ullman Show.” Groening was a bit apprehensive at the thought of handing over the rights to his characters, so he created the Simpsons to fill the slot.

At its final publication last Friday, Life In Hell was only appearing in 40 papers. Now to dig out my Jeff and Akbar t-shirt, circa 1988.