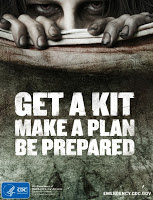 CDC: There Are No Actual Zombies

You may recall that last year the Centers for Disease Control released its well-received Zombie Apocalypse Report, which was actually their cheeky way of encouraging disaster preparedness. However several recent news items forced the CDC to announce today that there are no actual zombies.

“CDC does not know of a virus or condition that would reanimate the dead (or one that would present zombie-like symptoms),” wrote agency spokesman David Daigle in an email to The Huffington Post. Nevertheless, recent incidents in which humans reportedly ate human flesh have the Internet in a firestorm, with “zombie apocalypse” being Google’s third most popular search term by Friday morning.

Which takes me back to the warning I found scrawled on the men’s room wall of a Hell’s Kitchen gay bar back in 2005.

In the event of a zombie crisis:

Previous Headline Of The Day
Next FRC Cheers ExxonMobil