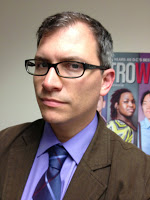 Over the past few years I’ve probably excerpted the excellent work of gay reporter Chris Geidner hundreds of times via his gig at Washington DC’s MetroWeekly. Today Geidner moves up to a much bigger audience.

Chris Geidner joins BuzzFeed as Senior Political Reporter and will continue his aggressive, news-driven coverage of politics and policies of LGBT issues and of the battles over marriage. [Buzzfeed editor] Ben Smith: “Chris Geidner is the fastest, best-sourced reporter on his beat. The marriage wars and gay rights battles are some of the key stories of the decade; stories that readers from BuzzFeed to social platforms like Facebook, Twitter, and Reddit care about deeply. It deserves to be treated with a fair mind as a front-line political beat, and Chris is uniquely positioned to turn BuzzFeed into a hub for that coverage.”