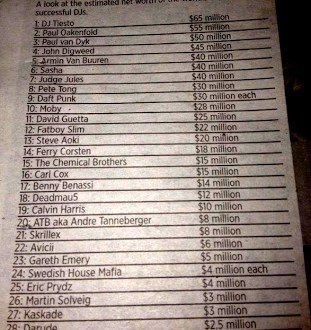 30 Richest DJs In The World

Via Celebrity Net Worth:

If you are a fan of electronic music, you will probably recognize the names on this list but we think you’ll be very surprised and impressed at just how rich and highly paid the top DJs are. These DJs put out their own albums and produce songs for other mainstream artists like Madonna and Britney Spears, but their main bread and butter still comes from private shows. If you’re one of the top ranked DJs in the world, you can earn hundreds of thousands and possibly even millions for a single concert depending on the date and location. A private birthday party at a Saudi Prince’s palace in Dubai or one Vegas New Years Eve show can earn a top DJ more money than most people will earn in a lifetime.

I don’t know what it says about me that at even in my clubbing dotage, I recognize and probably have tracks by all but a handful of these guys. And Tiesto at the top? A few good ones from him, but his style is so recognizable that all his tracks begin to sound the same. Also, as far as I know, there’s not one gay DJ on that list. (Tipped by JMG reader Michael)