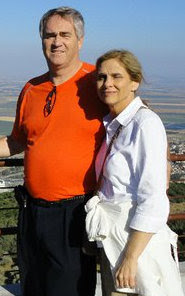 Wife Of Amendment One Sponsor: He
Wrote The Bill To Protect Caucasians

According to poll workers and a freelance journalist who was present, the wife of the author of North Carolina’s Amendment One says that her husband wrote the bill to “protect Caucasians.”

Chad Nance, a Winston-Salem freelance journalist who is currently active in electoral campaigning, says poll workers outside the early voting site at the Forsyth County Government Center in downtown Winston-Salem reported to him that the wife of NC Sen. Peter Brunstetter remarked today that her husband sponsored legislation to put the marriage amendment on the primary ballot “to protect the Caucasian race.”

Nance paraphrased the remarks, as told to him by those who were present: “During the conversation, Ms. Brunstetter said her husband was the architect of Amendment 1, and one of the reasons he wrote it was to protect the Caucasian race. She said Caucasians or whites created this country. We wrote the Constitution. This is about protecting the Constitution. There already is a law on the books against same-sex marriage, but this protects the Constitution from activist judges.” Nance said he recruited a friend, who works for the Coalition to Protect All North Carolina Families, to witness his interview with Jodie Brunstetter.