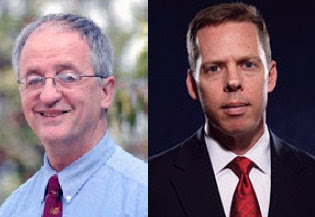 Virginia Delegate Bob Marshall (left), who is second only to Eugene Delgaudio among his state’s raving loons, is trying to block the appointment of an openly gay district court judge. Just because.

Delegate Bob Marshall said he will seek to remove the name of Richmond prosecutor Tracy Thorne-Begland from a list of proposed District Court judicial appointments. “I don’t even think it’s proper to put his name forward because of his behavior,” said Marshall, who called Thorne-Begland “a homosexual activist,” in a press release. Thorne-Begland has been nominated to serve as a judge for Richmond’s General District Court, but, Marshall challenges the nomination on the grounds of the prosecutor’s sexual orientation.

“We have a constitution which says marriage is between one man and one woman and if he’s taking an oath, he has to uphold and defend that as a judge,” said Marshall. “If his lifestyle is exactly contrary to that… I don’t see how he could do that,” he said. Thorne-Begland lives with a partner and they have two children. “I don’t know why the folks on the courts committee didn’t catch this before…but they didn’t…but it’s up to us to act as a backstop,” said Marshall, whose request has so far been denied by House Republican leadership.

Thorne-Begland is a former Navy aviator who was discharged under DADT. (Tipped by JMG reader Ryan)

PREVIOUSLY ON JMG: Last summer Marshall claimed it is a felony for a state office to fly the rainbow flag. Marshall has also called on Virginia to issue its own currency, and has claimed that God punishes women who have abortions by giving them deformed children. After the DADT repeal bill passed, Marshall tried to have gays banned from the Virginia National Guard.