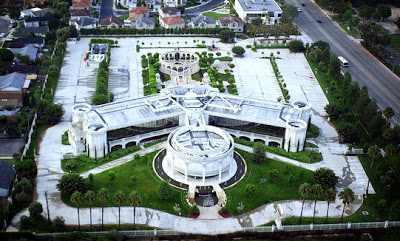 Here’s just a little of what the New York Times says about televangelists Paul and Jan Crouch.

Mr. and Mrs. Crouch have his-and-her mansions one street apart in a gated community here, provided by the network using viewer donations and tax-free earnings. But Mrs. Crouch, 74, rarely sleeps in the $5.6 million house with tennis court and pool. She mostly lives in a large company house near Orlando, Fla., where she runs a side business, the Holy Land Experience theme park. Mr. Crouch, 78, has an adjacent home there too, but rarely visits.

Its occupant is often a security guard who doubles as Mrs. Crouch’s chauffeur. The lavish perquisites, corroborated by two other former TBN employees, include additional, often-vacant homes in Texas and on the former Conway Twitty estate in Tennessee, corporate jets valued at $8 million and $49 million each and thousand-dollar dinners with fine wines, paid with tax-exempt money.

Here’s the part you may find the most infuriating.

Ms. Koper and the two other former TBN employees also said that dozens of staff members, including Ms. Koper, chauffeurs, sound engineers and others had been ordained as ministers by TBN. This allowed the network to avoid paying Social Security taxes on their salaries and made it easier to justify providing family members with rent-free houses, sometimes called “parsonages,” she said.

In case you’re wondering why Mr. and Mrs. Crouch maintain separate side-by-side luxury mansions in multiple cities, I remind you of this.

In September 2004 the Los Angeles Times reported that in 1998 Crouch paid Enoch Lonnie Ford, a former employee, a $425,000 formal settlement to end a wrongful termination lawsuit. At that time it was reported that Crouch had had a homosexual encounter with Ford. TBN officials acknowledge the settlement, but contested the credibility of Ford who is a convicted felon.