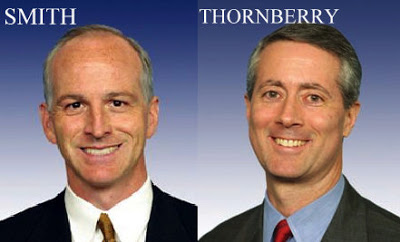 Two members of the U.S. House, one from each party, are seeking to lift a decades-old ban on distributing pro-America propaganda campaigns within the United States. Congress passed bills in 1948 and again in 1987 to protect American audiences from disinformation campaigns created by the U.S. government for use overseas.

The bi-partisan amendment is sponsored by Rep. Mark Thornberry (R) from Texas and Rep. Adam Smith (D) from Washington State. In a little noticed press release earlier in the week — buried beneath the other high-profile issues in the $642 billion defense bill, including indefinite detention and a prohibition on gay marriage at military installations — Thornberry warned that the current law “ties the hands of America’s diplomatic officials, military, and others by inhibiting our ability to effectively communicate in a credible way.” The bill’s supporters say the informational material used overseas to influence foreign audiences is too good to not use at home, and that new techniques are needed to help fight Al-Qaeda. Critics of the bill say there are ways to keep America safe without turning the massive information operations apparatus within the federal government against American citizens. [snip]

The new law would give sweeping powers to the State Department and Pentagon to push television, radio, newspaper, and social media onto the U.S. public. “It removes the protection for Americans,” says a Pentagon official who is concerned about the law. “It removes oversight from the people who want to put out this information. There are no checks and balances. No one knows if the information is accurate, partially accurate, or entirely false.” According to this official, “senior public affairs” officers within the Department of Defense want to “get rid” of Smith-Mundt and other restrictions because it prevents information activities designed to prop up unpopular policies—like the wars in Iraq and Afghanistan.