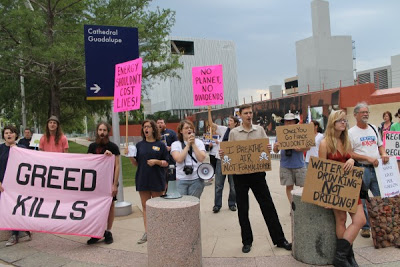 Despite facing years of protests including one outside of today’s meeting, the shareholders of ExxonMobil have once again refused to grant employment protections to LGBT workers. The Dallas Voice reports:

Meeting at the Meyerson Symphony Center in the Dallas Arts District, the ExxonMobil shareholders voted 80 percent to 20 percent Wednesday morning against a resolution asking the corporation to amend “its written equal employment opportunity policy to explicitly prohibit discrimination based on sexual orientation and gender identity and to substantially implement the policy.” The 80-20 margin of defeat was among the largest for the proposal, which has been introduced each year since Mobil and Exxon merged in 1999. The percentage of shareholders voting for the policy had increased steadily over the years to about 40 percent, before dropping off significantly after gender identity was added in 2008.

Before the two companies merged, Mobil had been one of the first major corporations to provide domestic partner benefits and workplace protections for gay employees. Those benefits were rescinded when Exxon came on board.