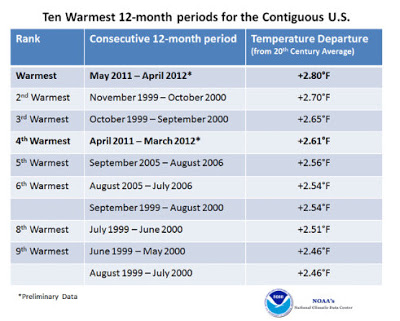 What do all the time periods listed above have in common? And here’s more about the last 12 months:

The past twelve months were the warmest twelve months in U.S. history, said NOAA’s National Climatic Data Center (NCDC) on Tuesday, in their monthly “State of the Climate” report. Temperatures in the contiguous U.S. during May 2011 – April 2012 broke the previous record for warmest 12-month period, set November 1999 – October 2000, by 0.1°F. The past twelve months have featured America’s 2nd warmest summer, 4th warmest winter, and warmest March on record.