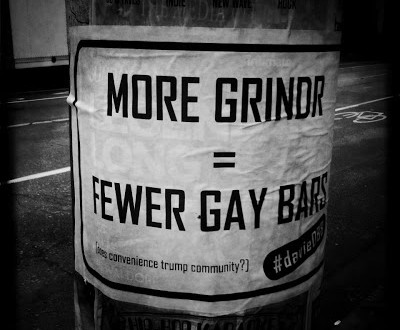 The decline of gay nightclubs commenced well over a decade ago with the advent of AOL chat rooms. And further spurred both by the rapid gentrification of urban areas that once hosted multiple gay dance palaces and the increased social integration of LGBT youth with their straight peers, the first decade of the new century saw the demise of even more gay-specific spaces. This phenomenon has been heavily discussed here on JMG and elsewhere, but the above image, which is currently being passed around on Facebook, brings the issue to the fore once again. Today’s question: How does social media affect your club-going habits? (Image via JMG reader BStewart23)

Previous Why Conservatives Are Sweet, Part Two
Next Headline Of The Day