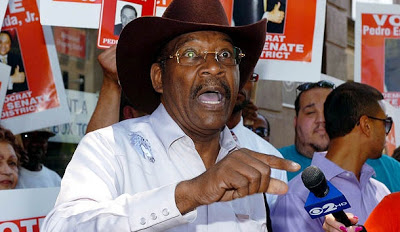 Sen. Ruben Diaz: My Savior Jesus Christ Will Never Allow ME To Be Sent To Prison

The Four Amigos – the band of New York State Senate Democrats who were instrumental in handing control of the Senate to Republicans in a wild power grab in 2009 – are now just one. After a string of criminal prosecutions felled former Senators Carl Kruger, Hiram Monserrate and, Pedro Espada, Jr., who was convicted on four counts of fraud in Brooklyn federal court yesterday, the only member of the amigos still free from felony conviction, not to mention still in office, is Rubén Díaz, Sr., the Bronx preacher in the cowboy hat known for his outspokenness on same-sex marriage and really, anything else that springs to his mind.

Diaz says he’s not worried he will fall victim to the same fate as the others, and he faces no indictment or charges of wrongdoing. But Clement Gardner, the head of nonprofit agency Christian Community Benevolent Association, which Diaz founded, was indicted in March on a $75,000 embezzlement charge. “There’s been persecution of all of us since the coup,” said Diaz in a phone interview, when I told him about the jury verdict in Espada’s trial. “I never worry. I never worry. I am a pastor, I am a preacher, and my life is in the hands of my savior Jesus Christ,” he said.

Diaz added that his fate is “already written,” so he doesn’t worry about ever being the Fourth Amigo to wear prison stripes. (Tipped by JMG reader Duncan)