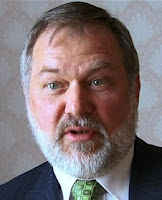 Scott Lively: Homosexuals Should Be Forced To Go Into Therapy Or Go To Prison

“First of all as regards to the bill, the bill hadn’t been written yet, I had an opportunity, I spoke to members of the Ugandan Parliament in their assembly hall, and there was several other speakers and the minister of ethics and integrity was there and he made a few comments. My suggestion was, rather than focusing on punishment, you should focus on therapy. I gave my own personal testimony, before I became a Christian, an instrumental factor was I got arrested for drunk driving and they gave me the option in Oregon of taking diversion, as they called it, or losing my license and going to jail.

“I chose the therapy option, it was one of the best things that ever happened, it was in that rehab center that I got down on my knees and surrendered my life to Christ, so I gave that as my testimony to the Ugandans saying this is the model you should follow, you could be the first country in the world to offer this as a standard, a national standard, that we want to help people overcome this sin.” – Scott Lively, describing what he claims to have advised the Uganda government. Lively is being sued for crimes against humanity by a Ugandan sexual minorities group who filed the case in Massachusetts. (Via Right Wing Watch)