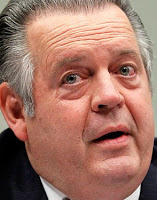 “Let me just say that first of all that the Devil takes pleasure in anything that causes destruction in human society and the homosexual lifestyle does cause destruction. It’s seen as one of the evidences in the decline of every empire we have seen; studies have shown it became rampant in the Persian Empire, the Greek Empire, the Roman Empire, the British Empire.” – Southern Baptist Convention head Richard Land, while interviewing NOM’s Jennifer Morse. (Via Right Wing Watch)