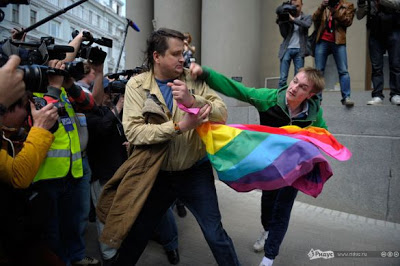 Violence broke out in Moscow today when members of the Russian Orthodox Church attacked a small group of gay activists who were attempting to stage an illegal gay pride parade.

More than 10 people were arrested outside the Moscow City Duma Sunday, where gay rights activists had planned to hold to protest a new law being discussed that would ban “homosexual propaganda,” RIA-Novosti reported. Three of those arrested were Orthodox Church activists who had come to disrupt the protest, while the other detained demonstrators were all participants of the gay rights protest, including event organizer Nikolai Alekseyev. News media showed pictures and videos of physical altercations between the two groups in which a man holding a rainbow flag was being attacked as journalists stood by with cameras rolling. Other pictures showed activists hold signs, including one anti-gay protester whose sign read “Moscow is not Sodom.”

VIDEO: In the clip below you’ll see that police swarmed the young man seen punching the gay activist in the photo at the top of this post. Other reports claim that a total of forty gay activists and counter-protesters were taken into custody.