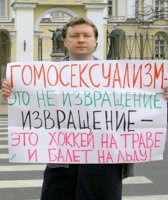 The first person to be fined under St. Petersburg’s ban on “gay propaganda” is renowned activist Nikolai Alexeyev.

A St. Petersburg court handed down its first conviction under the city’s new anti-gay law on Friday, ordering a leading gay activist to pay a 5,000-ruble fine for his picket against the law. The district court ruled that Nikolai Alexeyev had promoted homosexuality among minors by picketing City Hall with a sign reading, “Homosexuality Is Not a Perversion” on April 12. As proof of its verdict, the judge read out statements from several people who had expressed concern to the court that Alexeyev’s actions might harm their children, Interfax reported. Alexeyev denied wrongdoing in court, saying, “I do not know what it means to promote homosexuality, and I do not admit my guilt.” He said his protest had aimed to show that homosexuals have the same rights as other people.

Alexyev plans to appeal to the European Court of Human Rights.