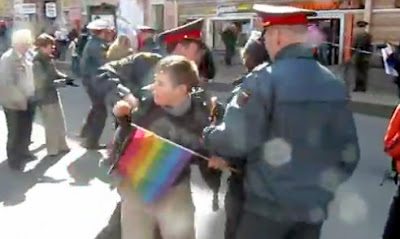 LGBT human rights abuse under the new “homosexual propaganda” law continues in St. Petersburg. Today 11 LGBT activists of St. Petersburg were arrested for carrying rainbow flags as part of the May 1st civil rights and freedom march on Nevsky prospect, city’s main avenue. This year’s May 1st march is a peaceful demonstration, permitted by the city administration. LGBT activists were marching as part of a larger “democratic” column, consisting of various democratic and civil society groups of St. Petersburg. 5 minutes into the march, police requested removal of rainbow flags. When activists refused, they were forcefully detained and are now facing charges of “propaganda of homosexuality” and non-compliance with the police. One activist was detained for holding a sign “homophobia is illegal.”

Towleroad has the videos.