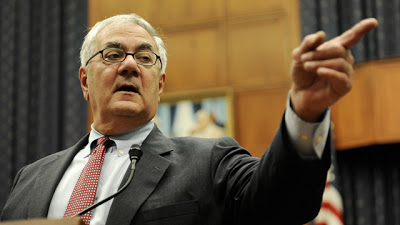 “Any gay or lesbian person with any self-respect should not be voting for any of the Republicans, including Mitt Romney, who made the degrading comment in one of the recent debates about how he kept Massachusetts from being the Las Vegas of gay marriage, kind of cheapening this very profound thing for us. This is a faker who in 1994, when he was trying to beat Ted Kennedy in a different era, said ‘Oh, I’ll be better than him on gay rights,’ and of course he’s been outrageous.

“In fact in 2004, when the Massachusetts Supreme Court had ruled in favor of gay rights, there was an effort in the state Legislature to overturn it. Mitt Romney led a fight against a whole lot of legislators who had courageously voted with us to uphold gay marriage, and he tried very hard to defeat them. I think he gave the business I’m in a bad name. He is the most unprincipled, dishonest, intellectually flexible guy I’ve seen. There does not appear to be any public policy to which he’s committed.” – Rep. Barney Frank, in an interview with Palms Springs’ Desert Outlook.