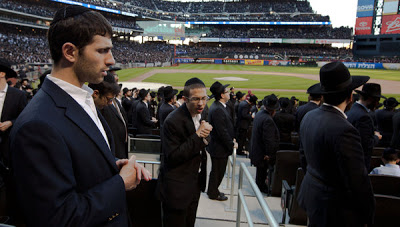 The New York Times gets to the heart of what some are calling the real reason behind yesterday’s sold-out protest of the internet by Ultra Orthodox Jews.

The rally in Citi Field on Sunday was sponsored by a rabbinical group, Ichud Hakehillos Letohar Hamachane, that is linked to a software company that sells Internet filtering software to Orthodox Jews. Those in attendance were handed fliers that advertised services like a “kosher GPS App” for iPhone and Android phones, which helps users locate synagogues and kosher restaurants. Nat Levy, 25, who traveled from Lakewood, N.J., to attend, said he frequently surfed the Web at a cafe, overseen by a local rabbi, that filtered out certain types of online content and monitored which Web sites he visited.