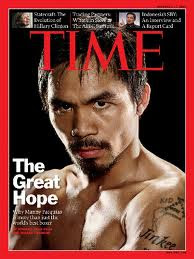 Pro Boxer: Gays Must Be Put To Death

Pro boxer Manny Pacquiao is slamming President Obama by calling for homosexuals to be put to death. Yeah, I’ve never heard of him either, but hey, he was once on the cover of TIME Asia.

LA Weekly has the story:

Manny Pacquiao, who lives and trains in Los Angeles, is probably in deep shit in this liberal city of brotherly love. That’s because the boxing champion said that gay men “must be put to death.” Really. In a recent interview with the National Conservative Examiner the fighter quoted the Bible in relaying his feelings about President Obama’s support for same-sex marriage: “If a man lies with a man as one lies with a woman, both of them have done what is detestable. They must be put to death; their blood will be on their own heads.” Um. Okay. He was quoting Leviticus 20:13. Pacquiao also said: “God only expects man and woman to be together and to be legally married, only if they so are in love with each other. It should not be of the same sex so as to adulterate the altar of matrimony, like in the days of Sodom and Gomorrah of Old.”

LA Weekly astutely points out that the Catholic and married Pacquiao is allegedly involved in an adulterous affair with a Filipino actress.