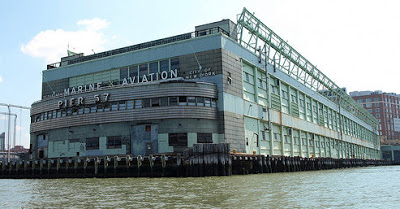 Last month I reported that this would be the final year for NYC Pride’s legendary Pier Dance at Pier 54 as the century-old open-air structure is scheduled to be demolished rather than make expensive repairs. Today we learn that NYC Pride is going to jump the gun and move this year’s party up the street to Pier 57, a gigantic floating enclosed structure most famed as the site where the NYPD housed over 1200 arrestees during the 2004 Republican Convention. Via press release:

“Pier 54 has been our home for over 20 years, and I’m sure it has great stories to tell. It will be missed,” said Mo George, Dance Director. “Pier 57 will allow us to take both Rapture on the River and Dance on the Pier to the next level and create the ultimate dance experience attendees have grown accustom to seeing.” Home to the annual Food & Wine Grand Tasting, and a number of other large events, the enclosed Pier 57 allows for NYC Pride’s events to take place regardless of weather conditions. “We believe this will usher in a new era for these events,” said Chris Frederick, Managing Director. “The space is significantly larger, which will allow for easier access to bars, restrooms, and social spaces. It is our intention to create an entirely new experience for our attendees. Considering these two events represent more than half of our annual fundraising efforts, their continued success and appeal has become the organization’s primary focus for the year.”

Because NYC Pride no longer has to be worried about their massive outdoor sound system keeping up half of New Jersey, this year’s party will start and end much later. Doors will open at 8pm and close at 2am. This will no doubt cause anguish for the many party promoters who traditionally start their own evening events as the Pier Dance ends. I’m also told that Pier 57’s capacity is far larger than Pier 54, so the annual screams about overcrowding shouldn’t be so loud this year. As this will now be an “inside event,” there’s not yet been a decision about the spectacular fireworks display that traditionally concludes the Pier Dance. That’s my favorite part, so let’s hope they find a way to make that happen. Tickets go on sale this Friday.