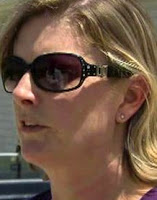 Every day NOM screams wildly inflated stories and outright lies about their campaign signs, but never ever do they mention the abuses of OUR signs by theft, by urine, by SHOTGUN. Here’s the latest:

A Moore County woman has been charged with contributing to the delinquency of a minor and removing three lawfully placed political signs after she was spotted last month removing signs against a controversial ballot initiative on marriage in North Carolina. Heidi Thompson, 44, of West End, was arrested Wednesday, after a motorist reported seeing a woman and her daughter pulling up the signs April 18 on Morganton Road in front of the Country Club of North Carolina. Thompson said Thursday that she was driving home after picking up her 13-year-old daughter from school and removed them after signs supporting the marriage measure had disappeared from her yard at least two dozen times. “I didn’t feel like I was stealing signs at the time,” she said. “I just looked at it as picking up trash along the side of the road.”