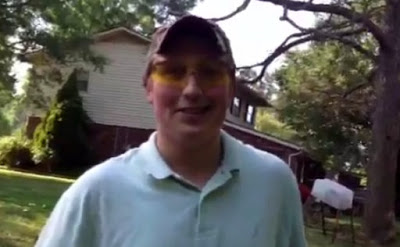 If Wiles was looking for attention, he got it. The video was spotted by opponents of the amendment who shared the link on Twitter. Then, dozens of sheriff’s deputies showed up at his home. “Our biggest concern was public safety. We had to make sure this wasn’t someone who planned to go out and hurt someone,” said Sgt. Tessa Burchett. Deputies said they don’t think Wiles intends to hurt anyone, but they do believe Wiles took the sign to shoot it. At this point, he has been cited with injury to property.

Doris and Boyd Ausmann, who live down the street from Wiles, said they support Amendment One, but believe the teen went too far. “I think the way you should handle it is going to the polls and cast your ballot,” said Doris Ausmann. “This stuff here is childish,” her husband added. “It is redneckish. It doesn’t accomplish anything.”

Deputies said what happened is also a valuable lesson to other teens. “Unfortunately, people don’t realize the permanence of posting videos and pictures online,” Burchett said. The video has been removed from YouTube. County officials said its investigation is not over. There is a county ordinance that deals with using firearms near other homes. Officials are also looking into the possibility of additional charges.

I’ll add the station’s video to this story when it becomes available.

Wiles is still facing punishment from the video. After discussing the case with the District Attorney, Wiles was cited for discharging a firearm within close proximity to a residential district. He could face an additional citation as well for destroying the sign, deputies say, but they must clearly identify a victim, or owner of the sign. They say, so far, it has been difficult to locate. “It’s unfortunate that as technically savvy as our youth are today, they still have no idea what “global” means,” deputies told WBTV. “He truly thought only his circle of friends would see it and thought it would just be funny.”

Previous Two Minutes Of Minnesota Hate, Vol. 18
Next Cross-Dressers Are In Your Shower