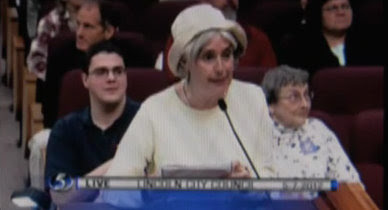 As some of you guessed, the Nebraska woman who issued that bizarre anti-gay rant to the Lincoln City Council is a diagnosed schizophrenic.

Jane Svoboda, 52, lives at an assisted-living facility in Lincoln and is listed as a protected person, according to court documents. Her brother, Patrick Svoboda of Ogallala, is her conservator because she is incompetent, the documents say. He was unaware of the video’s popularity, but wasn’t surprised — he knew it would be a matter of time before she got in trouble somewhere. He said he’s disappointed the video garnered such attention and jokes without the whole story. “To me, it shows how little society really cares about people with mental health issues,” Patrick Svoboda said. “She does have a very tender heart … but anything she says is certifiably schizophrenic … she’s not some crazy conservative.” He said her family has tried to get her help multiple times, but unless she harms herself or others, there’s not much more they can do.

It wasn’t the first time Svoboda has testified before the council. She also is a registered lobbyist at the Capitol. She usually speaks twice a month during the council’s open mic sessions, where citizens can talk for up to five minutes on any topic. The council sits patiently until she is done. Svoboda has talked about Chinese “subliminals” that come through cellphones and other electronics, paradise on earth and family members being killed by doctors. She once brought in a large stick figure that she said was her mother’s ghost, but the council told her not to bring in props anymore. She’s also well-known on the University of Nebraska-Lincoln campus, where she’s handed out thousands of fliers. Students have dubbed her “Crazy Blue Protesting Lady” because of the blue coat she often wears. A Facebook page about her has nearly 3,000 members.

How could such a deeply mentally impaired person be allowed to be a registered lobbyist? That’s easy. It’s because such literally insanely deranged people are often indistinguishable from the rank-and-file religious haters that organize against us. How different are Ms. Svoboda’s delusions from those who believe in a God that sends earthquakes to stop gay marriage?