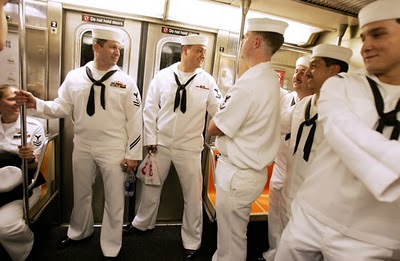 Mr. Fleet Week is climaxing. Waist-deep in the Hudson River he stands, back arched, toes curling, straining…UGH…to blow his patriotic load of bipedal cannon fodder one last time over America’s well-fingered g-spot, Midtown Manhattan. That spot, after six nights of polite (compared to the locals) but woefully unskilled (ditto) attention, is currently wavering perilously between grateful, exhausted satiety and “not tonight fuckwads, I have a headache.” As I watch the streets of Gotham swell a final time with jarheads and swabbies – all of them young perfect happy bounding eager horny puppies, their arrival again strikes me with feelings of envy and apprehension. They also make me think of boobies, but we’ll get to that in a bit.

The enlisted men, who comprise a mammoth portion of the visiting servicefolk, trod confidently, five abreast, down the almost deserted streets of midtown, streets that only hours earlier were abandoned by legions of locals fleeing to their summer refuges in the Hamptons, Fire Island, Newport, Cape Cod. The swabbies stream past posh drinkeries where smiling men in suits stand at the open doors, welcoming all. (They have spirited away the “not you, maybe you, never you” ropes.) Hey Navy! No cover! Fleet Week specials! The jarheads that come inside are probably well-aware that if they were employees here, they’d likely always be “back of the house” material to most of these beaming restaurateurs, who this week are eagerly waving Puerto Rican gunners and Mexico-born supply clerks into their depopulated VIP sections. But it’s OK. Everybody who’s anybody is out of town.

The swabbies don’t know that the folks who live behind the darkened-till-September windows of that fly penthouse duplex (with roof garden access!) consider Fleet Week the start of the “stink season,” an expression that means exactly what you think it doesn’t. These are the Ugly New Yorkers, the folks who spend a rilly, rilly unappealing amount of their time making it loudly known that Manhattan is the only place in the world to live if you are a Worthwhile and/or Important Person. (Except, you know, in the summer, when it isn’t.) We hate them. And if we had a bajillion dollars we would go right out and buy a ginormous house in Upper Hamptaukategue Bay-On-Ocean and spend all summer long glaring at them from the cabana on our private beach. We’d give those plus-one Conde Nasties and guest list Viacommies a frowning they wouldn’t soon forget, we tell you what. ‘Course, all that frowning would be one way, cuz…well, you know.

Sorry. Back to reality. On the corner of 10th Avenue and 50th, street vendors have cagily created a push-cart gauntlet, an obstacle course of crapola. Later tonight, this Spanglish Armada of bootleg reggaeton CDs, counterfeit Yankee hats and Twin Towers snow globes will prove irresistible to beer-goggled ensigns as they stagger towards the forbidding superstructure of the U.S.S. Wasp, which intimidates even the nearby Notable NYC Landmarks. And they are Official Kodak Photo Spots (™), so that there’s some high-end intimidatin’, missy. Must be the nuke-tipped missiles. The vendors lie in wait, confident, relaxing. It’s way early. It’s gonna be a while before that first Tupac Lives t-shirt gets airbrushed, before somebody gets their baby mama’s name burned onto a plaque bearing the likenesses of the Holy Trinity: Mother Teresa, the BVM, and Jennifer Lopez. Don’t be mad at the rocks that they got.

But, you know, fuck all that noise, dude. Because right now, on this last night, especially fucking tonight, dude, Fleet Week has better things to do with its money.

Bro, we gotta roll. Leave dat shit on the table, son. We get it the way back, aiight? Long as you ain’t throwed you money at every bitch you seen. (HIGH FIVE!)

You see, right now most of the men in Manhattan who are wearing white bell bottoms are likely carrying a fat roll of singles, a rubber-banded roll of dollar bills smirkingly acquired from the too-bored-to-be-disgusted tellers at every midtown branch of Chase or Commerce or Citibank. The tellers know where those singles are headed. Walking away from the bank, the roll of ones is fingered anxiously in each man’s pocket. This is everything left over from his entire leave, savings harvested via hot dog carts, bottom shelf whisky, and walking back to the Wasp instead of taking a cab, even though there’s five of you and it woulda only cost about 4 bucks each. Five, tops.

But, ah, five extra dollars to add to the roll of singles means five extra individual opportunities to place those dollars where they been destined to go. And that’s to UNICEF’s Feed The Children Fund. Snort. No. Actually, like Boy George, those singles are headed for a very short but closely scrutinized life on the NYC stage. There they will be shoved into the gaping orifices and glittery sweat-soaked thongs of the most popular and well-paid dancers of the New York City stage. Just like Boy George. Hah! Hey, the drummer just give me a rim shot! Just like Boy George! You’re. Welcome.

The “gentlemen’s establishments” ’round here seem tireless in their efforts to direct testicle-owning Gothamites to their nipplistiscated nightclubs, but even with their Howard Stern promotions, their taxi ads, their billboards, and their vampiric army of creepy Night Of The Steve Buscemi Living Dead guys handing out flyers all over Times Square, nobody seems to know where the strip clubs are. I can tell you without exaggeration that over the last week I have been asked, “Where the pussy at?” about a hundred million jillion times. Wait, it was three times. Whatever. The third time you mention pussy to the average gay man, his spam filter has kicked in. You can keep talkin’ all you want, but like that guy who wants to share his Nigerian lotto winnings with you, you’re just lying there unnoticed. Just like Boy George! (Yeah, still funny.)

I’m just about to cross Broadway when the intersection becomes flooded in a sea of white. An ill-organized flotilla of swabbies, perhaps one hundred in number, is milling around, anxious, excited, wanting to get somewhere really fast but having no idea where they are going or how to get there. The scene reminds me of a certain comic-book themed gay activist group. Some of the sailors shout conflicting directions to the others, but they do not appear to be in charge. Again, I am reminded. One of them says, “Dude, this sucks. We’re almost outta time. Let’s just all go do our own thing.” Reminded.

Then the light changes, the sailors surge, and somebody shouts, “Don’t nobody know the fuck where the pussy at?” And I die a little inside. At least they didn’t ask me. Somebody says, “Ask the hot nuts guy!” And still they don’t ask me. How rude. Some dude cups his hands and shouts, “Fellas, y’all just gotta stay going on 7th Avenue down to 23rd. It’s ’bout a thirty minute walk, fifteen if you double-time it.” And in a Broadway choreography miracle that is the stuff of which Tonys are made, one hundred young men instantly coalesce into a united multi-legged creature, a single-minded, purpose-driven, white bell-bottomed Naval sperm in search of an egg, probably one named Autumn, or maybe Summer, who is currently working her way through law school by stripping.

I stand there smiling, thinking there can’t possibly be enough ho’s in da house for when all those boys arrive. I watch them disappear past Red Lobster and I turn back to 42nd Street, thinking how I hope those boys at least get a good thrill from the dancers. And how I hope that a lot of them get to shove their damn singles wherever they want. Then I realize that all the titty bars I happen to be familiar with seem to be on 11th Avenue, not 7th Avenue, and I wince at the thought that those boys may have blown the last hours of their last night in New York City swimming up the wrong Fallopian tube. I can’t imagine what grim nightmare the U.S.S. Wasp may have in store for her crew. But I hope every. single. one. of them gets this pussy thing that intrigues them so. The ones that want it, anyway. Including the girls. Especially the girls.

Previous Christians Must Vote For Christians, Part 2
Next Gay Day Attendees Are After Children