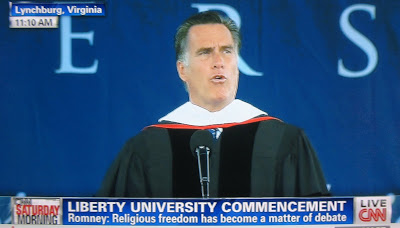 “The American culture promotes personal responsibility, the dignity of work, the value of education, the merit of service, devotion to a purpose greater than self, and, at the foundation, the pre-eminence of the family. The power of these values is evidenced by a Brookings Institution study that Senator Rick Santorum brought to my attention. For those who graduate from high school, get a full-time job, and marry before they have their first child, the probability that they will be poor is 2%. But, if those things are absent, 76% will be poor. Culture matters.

“As fundamental as these principles are, they may become topics of democratic debate. So it is today with the enduring institution of marriage. Marriage is a relationship between one man and one woman. The protection of religious freedom has also become a matter of debate. It strikes me as odd that the free exercise of religious faith is sometimes treated as a problem, something America is stuck with instead of blessed with. Perhaps religious conscience upsets the designs of those who feel that the highest wisdom and authority comes from government.” – Mitt Romney, speaking at today’s commencement at Dead Dead Dead Jerry Falwell’s Liberty University.