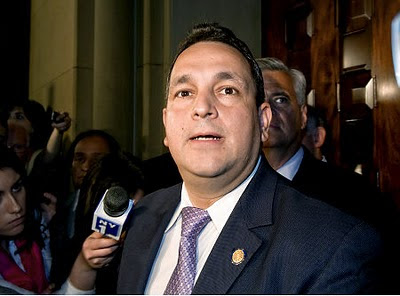 Convicted Friday on felony charges of campaign finance improprieties, former NY Sen. Hiram “Slasher” Monserrate has become the second Democrat from his chamber to be sentenced to prison this year. Last month former Sen. Carl “Closet Case” Kruger was sentenced to seven years for corruption and bribe-taking. Both senators were part of the notorious “Democratic Eight” who bucked their party leadership and sank marriage equality in 2009.

A crooked pol who avoided prison time for beating his girlfriend won’t catch the same break for swindling city taxpayers. Disgraced ex-state Sen. Hiram Monserrate pleaded guilty yesterday to corruption charges yesterday in a deal that calls for him to spend 21 to 27 months behind bars. Monserrate, 44, admitted scamming more than $100,000 in City Council “slush” funds approved by Speaker Christine Quinn to help fund a failed campaign for higher office while he served on the council in 2006. Reading from a prepared statement, Monserrate said he got the city to fund a nonprofit known as the Latino Initiative for Better Resources and Empowerment, or LIBRE. The group got about $300,000 in public money during 2005 and 2006, ostensibly so it could work with “churches, civil- rights organizations and community organizations . . . to counsel and assist individuals to secure their legal rights.”

RELATED: And about to make it a prison hat trick for Senate Democrats is former NY Sen. Pedro Espada, who is currently on trial for embezzling as much as $14M in public funds from a Bronx health clinic. Espada, you may recall, hijacked the entire New York Senate in the summer of 2009, temporarily joining the GOP in a wild-eyed bid to become the Majority Leader.

Previous Hutcherson: I’m The Gayest Guy I Know
Next Since Children Choose To Be Homosexual, They Obviously Deserve To Be Punched