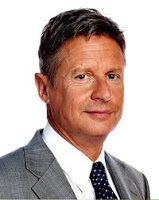 “Instead of insisting on equality as a U.S. Constitutional guarantee, the President has thrown this question back to the states. When the smoke clears, Gay Americans will realize the President’s words have gained them nothing today, and that millions of Americans in most states will continue to be denied true marriage equality . I guess the President is still more worried about losing Ohio, Colorado, North Carolina and Virginia than he is in doing the right thing. What is the President saying — that he would eat a piece of cake at a gay wedding if the state the happy couple lives in allows it ?. Where is the leadership? While I commend him for supporting the concept of gay marriage equality, I am profoundly disappointed in the President.” – Libertarian Party presidential nominee Gary Johnson.