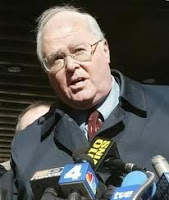 Last month I reported that Catholic League blowhard Bill Donohue is chasing down every Daily Show advertiser to demand they cease sponsoring Jon Stewart’s “anti-Catholic bigotry.” (Donohue is furious because Stewart superimposed a manger scene over a nude woman’s crotch.) Here’s the response Donohue just got from Kellogg’s:

“We understand that our customers come from a variety of backgrounds, experiences, lifestyles, and cultures and we respect their individual decisions to choose the television programs that they deem acceptable for themselves and their families. Consumers speak most loudly when they vote with their remote control and change the channel or turn off the TV if a program does not fit their personal criteria.”

Bolding is mine. Snork! Donohue says he’s now calling for a boycott of Kellogg’s too. Good luck with that.

Previous Slaggie: Help! I’m Being Oppressed!
Next Bryan Fischer: If Somebody Like ME Can Push Romney Around, What About China?